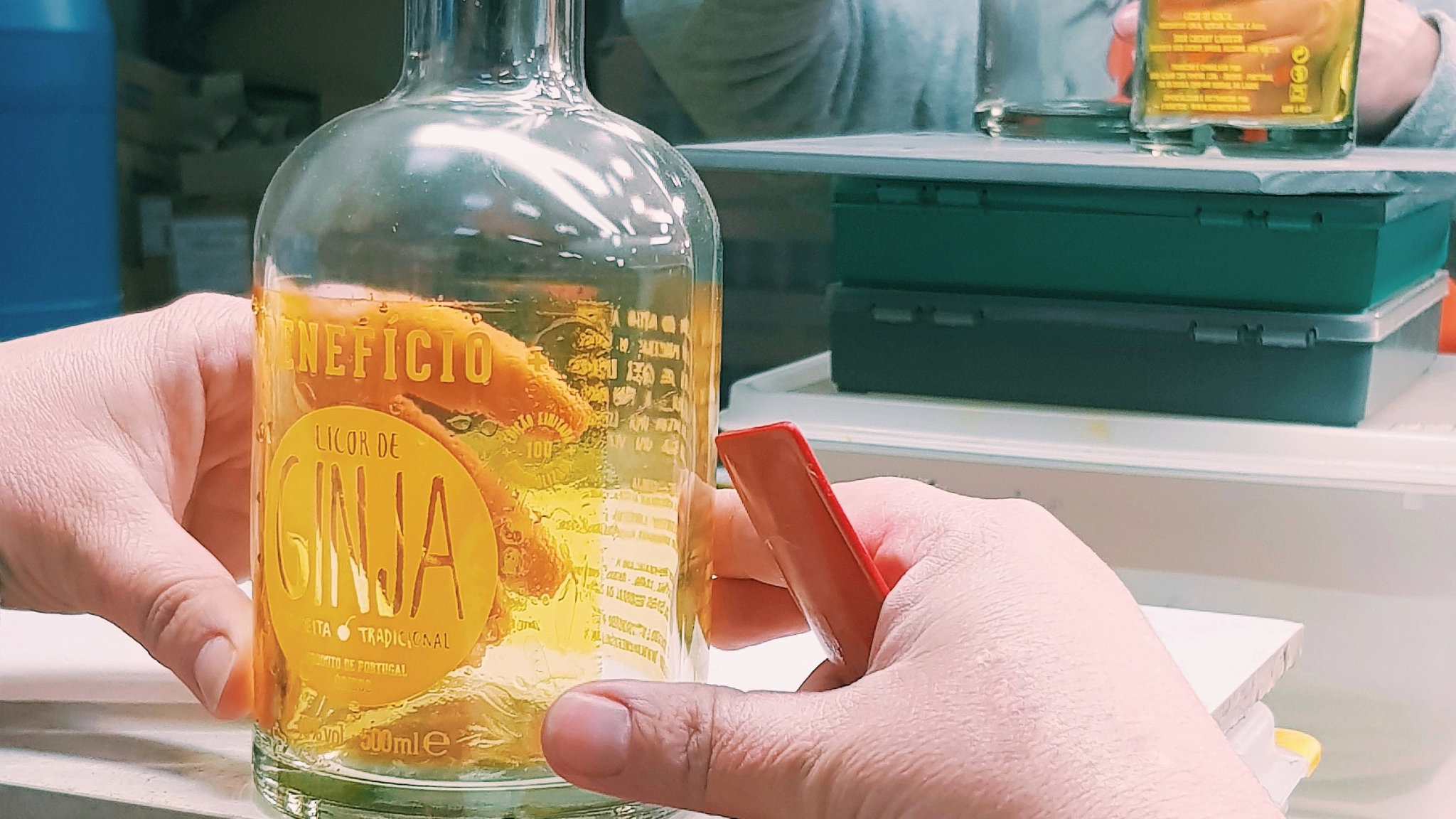 “We will never neglect attachment to the land.
Only then can we macerate the fruits
of a future that wants to be bright.
It is this radiant light, the sweetest.
This Benefit tells a story.
The third time, it was once ... ”

The Sour Cherry Benefício is made from the traditional wisdom and guarantees originality at the level of sensations – sight, touch, smell and taste. This is an exclusive blend of Benefício, developed in partnership with Oppidum.

The Óbidos Edition is a compliment to all who inspire, support and welcome us.

Our homes are the Óbidos Technological Park, headquarters of O Benefício as an integration in the global world; and Startup Lisboa, an institution that accompanies us, as a cosmopolitan and multicultural symbol.

Our Ginja Liqueur is made from the traditional knowledge of Oppidum, the only company that produces ginjinha with sour cherries faithful to the village of Óbidos.

Our starting point is emptiness and our specialization is to make it beautiful, with quality.

Here we make our main epigraph - 'Nobody knows what it is, but it will be incredible!'.

The values of creativity, discovery, knowledge and sharing that are part of the O Benefício editions, always culminate in the realization of an object with history, care and at the right time.

There is a mountain from where the view extends almost to Peniche.

But it is here, in Sobral da Lagoa (Óbidos, of course) that the roots are.

This is a man

"Artificially Colored". At the time when this note appeared on the labels, guaranteeing sales success, Dário Pimpão ran around the heaths around. From this hill. He was born here, in the same house that, after the necessary expansions, sees today the birth of what is (without immodesty, we guarantee), The Best Ginja de Óbidos Liqueur. Or the One. Which we have to explain later.

While his father struggled to dispose of agricultural products, his own and those of his neighbors, to the markets of this fertile West, the boy Dário and the other local brats did not jump over fences. Because here, today, as long as there is memory, the properties were delimited by ginjeiras. And if a remotely happy childhood can go through the trees to empanzinate itself from the last fruits of spring (or the first of summer?), What to say when, as an adult, you can turn them into unique nectar? It was what the father alchemized. And that Dário found out over time. And now he transmits to his daughter, Marta, a biologist by training, a liquorist at heart. The other great passion that runs in these sweetened bloods is sea salt. From Peniche to Berlenga. Right there, next to the big houses with maceration vats and guard stores, there is a semi-rigid boat. Whenever they can, "Farilhão with them". And it was like that all my life. The little girl Marta, a panther on her mother's part, already knew the crossing and all the corners of Berlenga, the fish species, the ones that the father fished, whenever he could, the dolphins that often flocked the boat and that launched it in the studies of biology marine. Yes, there are other charms beyond these fields. And they are Dário Pimpão's big dream. “Every day I try to go fishing for Marta to stay here and take care of all this. She happily embraced the mission. I still deal with a lot, but I want to reverse my role until it is residual. And when it's zero, Farilhão with him. ”

This is your work

The first bottles of Oppidum were sold in 1988. “My father died in 87 and did not see any of this. We thought about everything together, but we never got to see the first traffic jam ”, reveals Mr. Dário Pimpão. And he goes on to explain how he reached today's level: “The thing grew so much that the Ginjeiras do cercadas no longer reached my needs. Local producers were also realizing that sour cherry was a winning bet, due to its characteristics, unique in the country, and today there are many orchards. I own some of them myself, but I have no problem taking care of them. Either you dig in the vineyard or you dig in the vine. When it was time to receive the cherry from the other producers, I would leave mine in the trees. We are talking about an organic and perishable product, which deteriorates in less than 24 hours. So, I start the ginjais for free to local farmers and they exploit them. The only thing I ask you to do is sell me the cherry at the same price as the other producers ”. What comes next seems simple ...

The cherry liquor as we remember it, at our grandparents' house, “with them” at the bottom of the most decorated bottle in the cupboard, had brandy. That was how things were done in the past. Perhaps still, in some cases. Not here. Oppidum, a product of excellence, is achieved using alcohol of unmatched purity (96.3%, because there is no 100% pure alcohol), tasteless and odorless. The sour cherries are deposited in barrels until the height of ¾, which is then filled with this alcohol up to the top. There they stay, macerating (there is no distillation) for no less than a year. It is the alcohol that extracts the pulp. After this period, the content is crushed with a pressure that makes the crushing of the stone unfeasible. This has an important role, but in some barrels that are left to steep for 5 years, so that the alcohol also extracts the wooden “notes” borrowed by the stone and which, later, is added, in smaller proportions, to the Oppidum. According to Dário Pimpão, one of the most important stages, because they dictate the quality of this product (and some pride that it cannot hide), is decanting. That is, the period of a week in which the product of your work "rests" after crushing. For "the foot to settle". It would excuse this step if you filter the product, right after crushing. But according to him: “the filters are too clean. They take away the impurities, but also the aromas and flavors. They take everything ”. It is a time-consuming and expensive process. Maybe that's why he is the only producer who does it. The result is obvious. Its unquestionable quality. The beauty of all this is, even, in the fact that it is impossible to get two equal lots. “We are working with an agricultural product, 100% natural. And just as no two cheeses from the mountains are the same, the same applies here, even if sour cherries always come from the same producers. We can only control alcohol and sugar ”, he explains.

This is our land

The West is the Earth to the Mother of Sowing. Peasant. Organic. It has the wrinkles of its history pulled by a plow. And in Óbidos, this poem said with the diction of Natália Correia and the passion of Mário Viegas, a cry. So that Portugal can hear everything. It is a metaphor for an entire country. Because far beyond the historic village, surrounded by walls, an unavoidable tourist attraction, there is a hub of creativity. And innovation. Let’s call it Mother Ship. D'O Benefício. The Óbidos Technological Park, on Rua da Criatividade. No need for introductions. But not a tribute. This is ours. Because the land where we were born springs the best. By the hands of your people. Harvest the fruits and, without artifice or devices other than the ancestral ingenuity and creativity that meanwhile become tradition, practice what is the oldest alchemy. For the benefit of all, this time we took the Best Ginja de Óbidos Liqueur to Startup Lisboa, our second home. And it was in this incubator of creativity par excellence, the revival of this capital that it shines again today as it did in that time when the sunset reflected on millions of tiles covering a city that was teeming with life, which we considered. We proved it. We considered without thinking. We tried it again. We almost meditated. To conclude that there are imponderable ends. Because the principles are obvious. There, at 80 Rua da Prata, in downtown Lisbon, symbolic of what was the first truly cosmopolitan city on the Old Continent, where merchants flocked by profession and settled for passion, we again applied the oldest formula : Adding value to a product of excellence. As a diamond coming from Africa was cut there or Chinese silk was further transformed into a timeless piece, we left the Liquor at the disposal of one of the most fruitful Portuguese innovation hubs, the digital research and development laboratory Vitruvius Fab Lab, from ISCTE-IUL , where it was transformed into a single object, using a cutting-edge technological approach.

An auspicious future, where technology exists to improve everyone's life, will never neglect our DNA, the roots and the treasures they generate.

For us to be whole men, we will always have to start, as a child, to empanzinize ourselves from the last fruits of spring. Or the first of the summer. Only then will we survive any winter that humanity may have to pass.

We edit diversified unique pieces. Our mission is to develop high added value products, by creating a limited edition solely of 100 units of each of our products.